Time in The Shape of a Mine

Time in The Shape of a Mine

To celebrate the end of the Combe Down Stone Mines Stabilisation Project, the Homes and Communities Agency made funding available for commissioning public art. The programme for temporary and permanent work in Combe Down village near Bath was devised by public art consultants Frances Lord and Steve Geliot. The Combe Down Stone Mines Stabilisation Project was necessary to counteract the years of excessive mining that by the 1900s had left Combe Down village in a dangerous position. Over 700 houses had been built over the now failing mines. In the 18th and 19th centuries Combe Down (Bath) stone was mine extensively and used to build the Georgian city of Bath. In 1734 Ralph Allen commenced building Prior Park to demonstrate the beauty and durability of the stone. Subsequently, the stone became much sought after and was also used to build parts of Longleat and Windsor Castle and shipped around the world. From 2000 English Partnerships (now the Homes and Communities Agency) began funding Bath & North East Somerset Council to investigate and prepare options for stabilising the mine complex and to carry out Emergency Stabilisation, culminating in 2005 in the award of a grant aid to undertake full stabilisation. By 2009 the 22 hectares of very shallow limestone mine were filled with in excess of 590,000 cubic metres of foamed concrete, the largest project of its kind in the world. Over the past year the artistic team – Andy Croft (poetry), Paul Englishby (music), Neville Gabie (photography), Oogoo Maia (sound), Alec Peever (stone carving), Chris Tipping (ceramics) and Simon Whittaker (film) – have met and worked closely with many residents in Combe Down who helped shape ideas for the artworks as well as contributing directly to their content, ensuring that the works created reflect the rich and fascinating history of this unique village. A celebration event held in the village in September 2009 brought the many strands of the public art programme together and marked the completion of the project and a village made safe. The day featured Andy’s Croft’s commissioned poetry and pageant, music, film, sound, live performances, 3D projections, celebratory beer with a Combe Down artist-designed label, and stalls showcasing the considerable Combe Down talent. This publication and collection of poems highlights some of the work from Andy Croft’s residency at Combe Down. Andy brought great energy and enthusiasm to the Combe Down Public Art project, working creatively and productively with pupils from Combe Down Primary and Ralph Allen schools, residents and miners – no mean feat. Some of the children’s poems were performed at a Poetry Picnic held at Combe Down Primary School in June 2009. A separate publication is available of Andy’s pageant script which tells the story of the village from the Romans through to the 21st Century. – Frances Lord, September 2009. 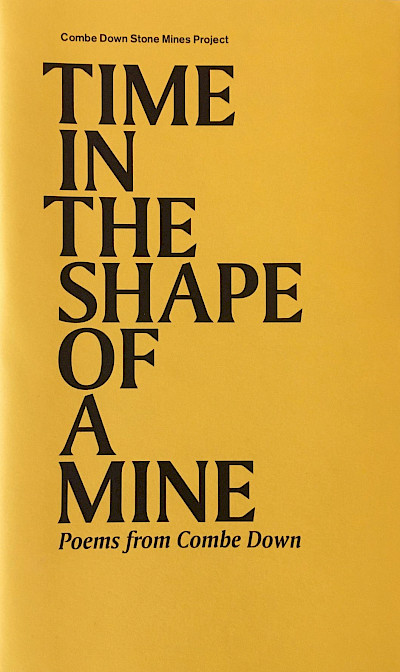